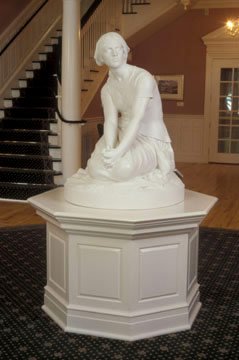 Since its founding, Longwood has reminded its community of the honor and accomplishments achieved by its leaders through portraiture depicting its presidents and outstanding faculty. Many of these portraits can be found in Ruffner Hall, along with two watercolors by Christopher Register of Longwood’s art department, a gift from the University of Virginia commemorating the rededication of the Rotunda following the calamitous fire of 2001.

Additionally, Ruffner Hall is home to not one, but two, statues of Joan of Arc, a patron saint of Longwood since its years as an all-female teachers’ academy. Joan of Arc in Domrémy is on permanent display in the Rotunda of Ruffner Hall. Affectionately known to the Longwood community as “Joanie on the Stonie,” this statue was purchased as a gift to the school by the Class of 1914. It is a plaster cast made by the Boston firm of Caproni Brothers after Henri-Michel-Antoine Chapu’s Joan of Arc in Domrémy, a work honored at the 1870 Paris Salon.

The other Joan of Arc sculpture is a reduced version of the bronze 1915 monument Joan of Arc by Anna Vaughn Hyatt Huntington (1876-1973), one of the foremost American sculptors of the early 20th century. Popularly known as “Joanie on the Pony,” Longwood’s copy, based on a casting of that monument in New York City, was given by Huntington to the college in 1927 at the request of the students. “The monument is considered one of the finest equestrian monuments in the United States,” said Robin Salmon, vice president and curator of collections at Brookgreen Gardens, Huntington’s summer home. “It’s the first equestrian monument of a woman by a woman.” Huntington’s Joan has traditionally been on display in the Colonnades.

The International Students Lounge in East Ruffner houses a selection of works from or inspired by ancient and modern European and Asian cultures.