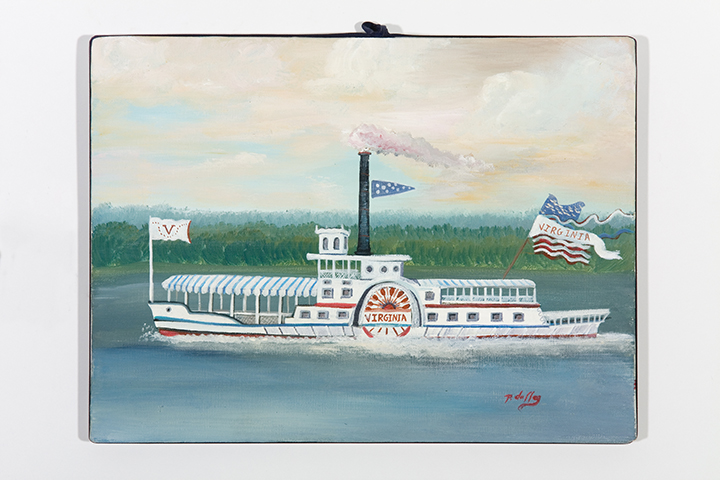 The Virginia, 1984
acrylic on canvas

Collection of the Longwood Center for the Visual Arts
The Jack Blanton Collection
Gift of Jack Blanton
2012.12.20

Parks Pegram Duffey III is a self-taught artist who paints nostalgic scenes, mostly of Virginia, with great detail and vibrant color. In a November 27, 1984, Richmond News Leader article by Ann Holiday, Duffey explained, “I mainly like Southern themes. There’s something about this light and air that goes with the paintings. There’s something about the lighting, and there’s a mood that goes along with it.” About his process he stated, “I’ll photograph [the scene] for certain details. Sometimes I paint from life, but the majority of the time I just get the impression and then go home and paint it.”

The date of this painting suggests that it most likely depicts the steamboat Virginia V, built in 1922 and restored in 1978-83. According to a 1992 article for the National Park Service, “Excursion Steamer Virginia V. National Historic Landmark Study” by James P. Delgado, “The Virginia V was, as her name implies, the fifth of the Virginia steamers. Built by M. M. ‘Matt’ Anderson at Maplewood, a small community on Puget Sound opposite Vashon Island, Virginia V was ordered and laid down for the West Pass Transportation Company in 1922. Carrying passengers, produce and mail, the company’s steamers carried on a tradition of steam navigation on Puget Sound that dated to 1853 and the arrival of the tiny steamboat Fairy.” In 1992, the Virginia V was designated a National Historic Landmark.