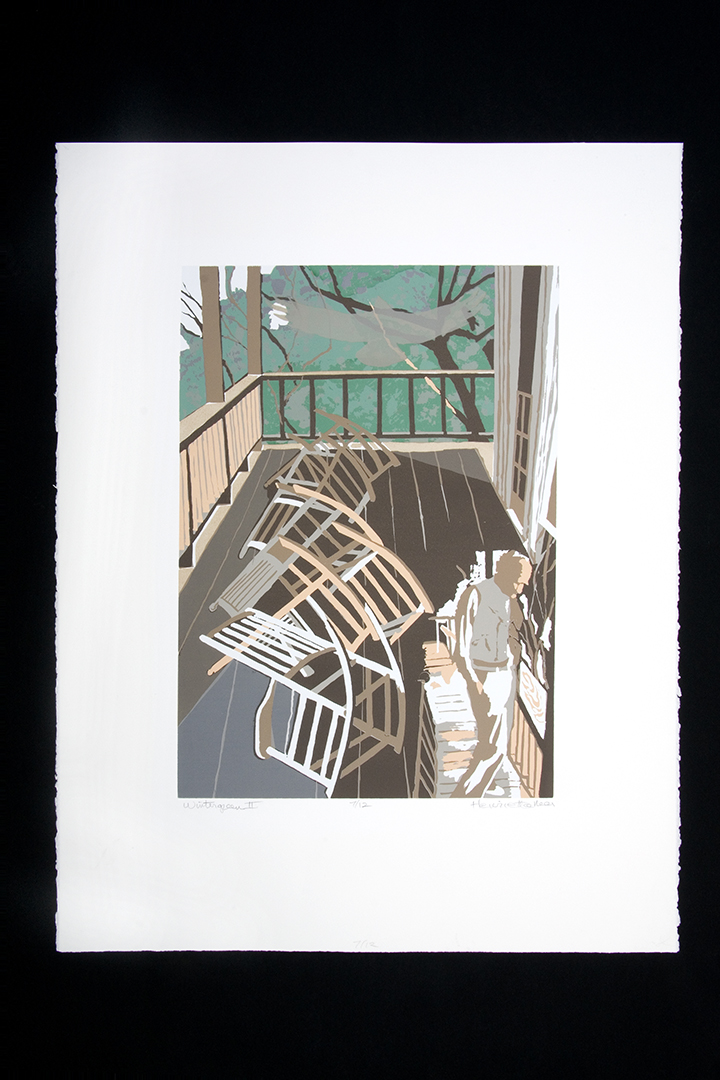 HENRIETTA NEAR (b. Holyoke, Massachusetts, 1929)

Collection of the Longwood Center for the Visual Arts
The Jack Blanton Collection
Gift of Jack Blanton
2007.23.33

A dancer, art historian, and artist by training, Henrietta Near was pushed definitively toward art-making by the resurgence of an old ankle injury that forced her to give up dancing in her early thirties. Searching for a new commitment, she happened upon a class in silkscreen (also known as serigraphy) and eventually became hooked. She is quoted in a March 19, 1981, article in the Richmond Times-Dispatch as saying, “I like silkscreen because it’s a very physical medium. You’re always moving around.” She was excited by the suspense of making a multi-screen print, having to wait until the last color is printed to see what the image will really look like. Movement in space, development over time; here is an artist thinking at least in part like a dancer, pulling together in her work some of the loves of her life.

A third love of Henrietta Near’s life was her husband, Pinkney L. Near. The two became acquainted when Henrietta, after receiving a B.F.A. in art history from Wellesley in 1951, moved to Richmond to take a job in the education department at the Virginia Museum of Fine Arts. There she met and subsequently married Pinkney, a research assistant who became the VMFA’s senior research curator and Paul Mellon curator. In 1989, when Wintergreen II was made, Pinkney Near was mortally ill; he died in 1990. The print, in 15 colors, is a farewell.

In her printmaking, Henrietta Near has used both drawn and photographic images. In Wintergreen II the multiple perspectives hint at the photographic assemblages that were a more recent development in her work. In making this print Near did, in fact, work from photographs that she’d taken, but the image is entirely drawn.

Near has studied art, taught art (both drawing and serigraphy), created art, and given generous support to other artists in the greater Richmond area. She helped to found Artspace and art6 galleries in Richmond. Both institutions, while providing a showcase for local visual artists’ work, also emphasize education and outreach involving the performing arts—including dance, that earlier commitment of Near’s.