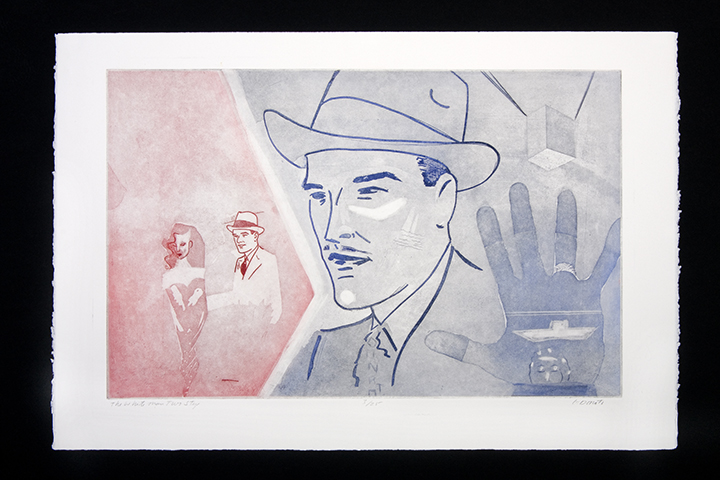 Collection of the Longwood Center for the Visual Arts
The Jack Blanton Collection
Gift of Jack Blanton
2007.23.18

Gerald Donato grew up in Chicago and earned his M.F.A. from the University of Wisconsin at Madison. He came to Richmond in 1968 to join the art department faculty at Virginia Commonwealth University (VCU) and retired in 2005 after 36 years of teaching both printmaking and painting. Edwin Slipek Jr. wrote in a January 24, 2007, article for Style Weekly (Richmond, Virginia), “In a career spanning five decades, Donato has established himself as one of Virginia’s most prolific, fascinating, and dynamic talents.”

As a postmodernist, Donato fused appropriated imagery (pre-existing images that are re-used in a different context to alter meaning) and styles found in popular culture into images exuding irony and satire. In a catalog for Donato’s 2007 retrospective at VCU’s Anderson Gallery, Richard Roth wrote of Donato’s appreciation for everything visual: “Donato is a bundle of dichotomies. He is at once a lover of high and low, a practitioner of abstraction and figuration, and an individual of great sensitivity as well as capable of robust vulgarity.” Roth continues, “In the end, Donato’s work fits our postmodern era—it is non-dogmatic, it appropriates guiltlessly, it is a display case of painting devices and signs, it is often funny and ironic, perhaps post-historic [term applied to the idea that history has ended; see also Arthur Danto’s Beyond the Brillo Box: The Visual Arts in Post-Historical Perspective], adamantly pop, and stands ferociously against all that is pompous and pretentious.” Donato’s approach in art and life was confrontational and irreverent. As a professor he was known for his ability to cut through students’ defenses and posturing to help them grow as artists.