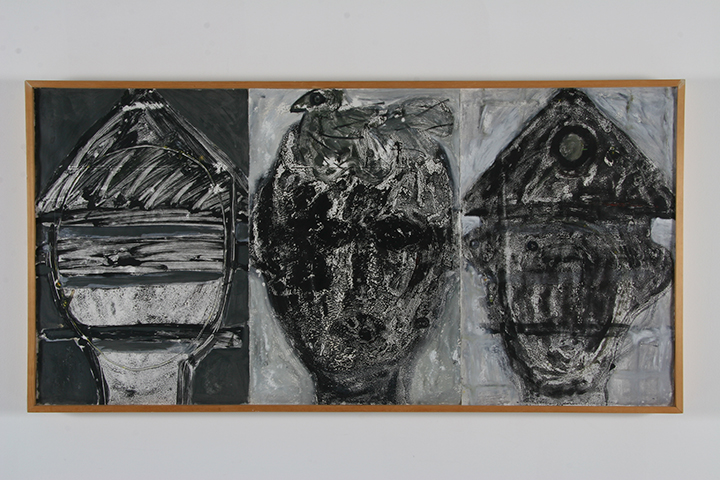 Collection of the Longwood Center for the Visual Arts
Virginia Artists Collection
Gift of Alyssa Salomon and Bill Lupoletti
2004.6

These heads’ sheer scale and their curious melding with house and bird forms conjure thoughts of monumental megalithic forms like the moai, the famed statues of Easter Island. Like the moai, Bowring’s near featureless faces have mysterious and haunting qualities. Rather than portraits of individuals, they appear to be symbolic forms.

Sally Bowring explains, “At the time I was putting together images almost as language. The inspiration was a comical image I had created of a bird sitting on a head. This led to many extended thoughts and imagery from headdresses to the Jungian symbolism of birds being messengers of transition, which was happening at that time in my life. The other imagery included a house form that wound up in this piece becoming the hat of the image on the left and the peak of the image on the right. House, bird, and stylized human head were the essential components of the entire body of work. It was for my 49th year, a very important year of transition.”

Sally Bowring earned an MFA from Virginia Commonwealth University; a BA from Goddard College (Plainfield, VT), and AAS from the Fashion Institute of Technology (New York, New York). She is represented by Reynolds Gallery in Richmond, and her work has been exhibited extensively in Virginia. Her work can be found in several corporate collections including Philip Morris USA (now Altria), Media General, the Federal Reserve Bank of Richmond, and the Markel Corporation, among others.