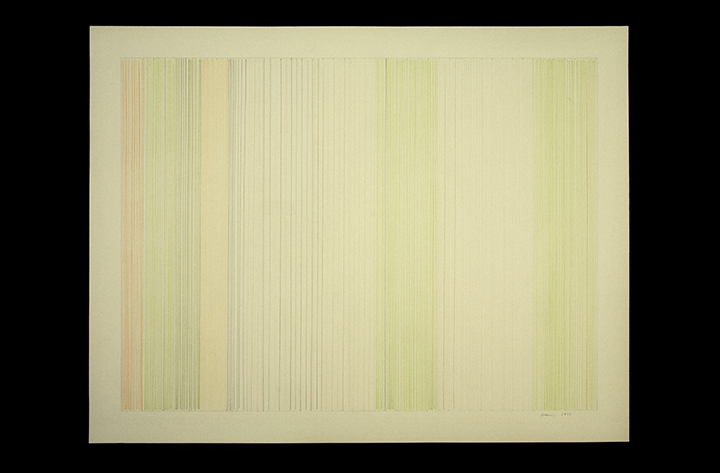 Collection of the Longwood Center for the Visual Arts
The Jack Blanton Collection
Gift of Jack Blanton
2008.13.3

Gene Davis was born in Washington, D.C., and came to art in his late twenties. Before he supported himself through art, he worked as a writer/reporter/ newspaperman, serving throughout the Truman Administration as a White House correspondent. Davis admired artists Paul Klee, Barnett Newman, and Kenneth Noland. Yet he aligned himself with none of them. Davis once said, “I think I’ve painted some of my best pictures with an attitude of not giving a damn.”

Though the drawing exhibited here is a relatively small example of his work (some pieces are street-size), it illustrates Davis’ life obsession: the stripe. For Davis, the stripe was a vocabulary for systematic expression of rhythm and time—for example, “the use of one-two, one-two, one-two clustering to form a large band that almost becomes monochromatic—but not quite.” In addition, he felt particular moods could be conveyed through repeating and alternating colors and spatial intervals. “I’m interested,” he summarized it, “in exploring the format in all its various manifestations.” Davis described himself as “different from most other stripe painters.” “I think that my work, more than most, permits one to forget about unity because the stripe itself carries with it a built in unity, in that it tends to hold the painting together automatically. So you can take fantastic liberties with colors that you could not if you were using circles or triangles or some other geometric form.”

Gene Davis is a celebrated American artist whose work can be found in major museums including the National Gallery of Art (Washington, D.C.), the San Francisco Museum of Modern Art, the Smithsonian American Art Museum, and the Whitney Museum of American Art, among many others. During his lifetime he received numerous awards such as a Guggenheim Fellowship and a National Endowment for the Arts Individual Fellowship. Several monographs have been published about his life and work.