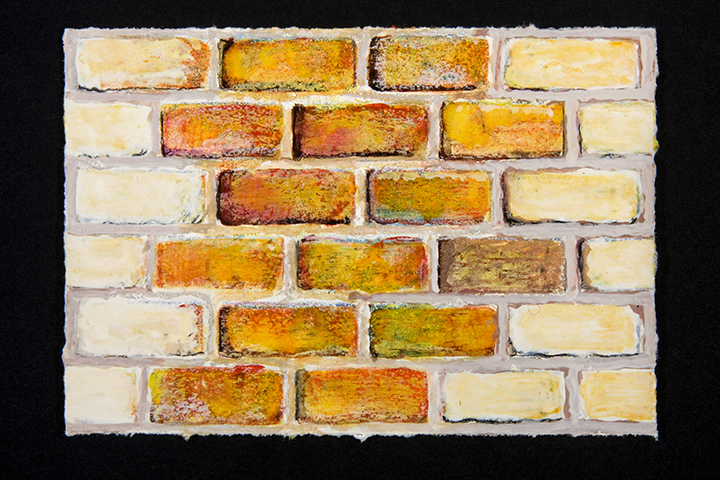 Collection of the Longwood Center for the Visual Arts
The Jack Blanton Collection
Gift of Jack Blanton
2007.23.32

James Miller painted one of his first paintings of a wall in 1975. By the 1980s he was seriously investigating the visual and symbolic qualities of that subject matter. He has said, “Walls support, enclose, divide, and protect. I find the image of the wall compelling as metaphor, symbol, and point of departure for my work.”

In a 1988 Richmond Times-Dispatch article by Roy Proctor, Miller is quoted as saying, “The wall is obviously a very compelling image to me. Walls have allusions to things like shelter and architecture and archeology and anthropology. They are, ironically, barriers—internal barriers, external barriers. Walls have existed all through history. Hadrian’s Wall. The Great Wall of China. The Berlin Wall with its awful kinds of ramifications. Walls tell us a lot about how we choose to live.”

From the shallow space to the intricacies of color, pattern, texture, and scale, painting pictures of walls is an artistic challenge. Richmond Times-Dispatch critic Robert Merritt praised Miller for his success in taking on a difficult subject matter and commented that this was “the meaty substance of art.” A painting of a wall is more than its surface. Here it reflects Miller’s training in abstraction and his interest in trompe l’oeil painting, pop art, and photo realism. It also reflects a sense of humor and individuality. Miller even loves the irony of hanging a wall on a wall.

James Miller received a Diploma in Art and Design from Leeds Polytechnic (Leeds, England) and an M.F.A. from the University of Arkansas. He has taught printmaking and painting at Virginia Commonwealth University since 1971. He was a founding member and president of Richmond’s 1708 Gallery. Miller’s work has been exhibited widely in the U.S. and abroad, including in exhibitions in Israel, Peru, Belgium, and Korea.