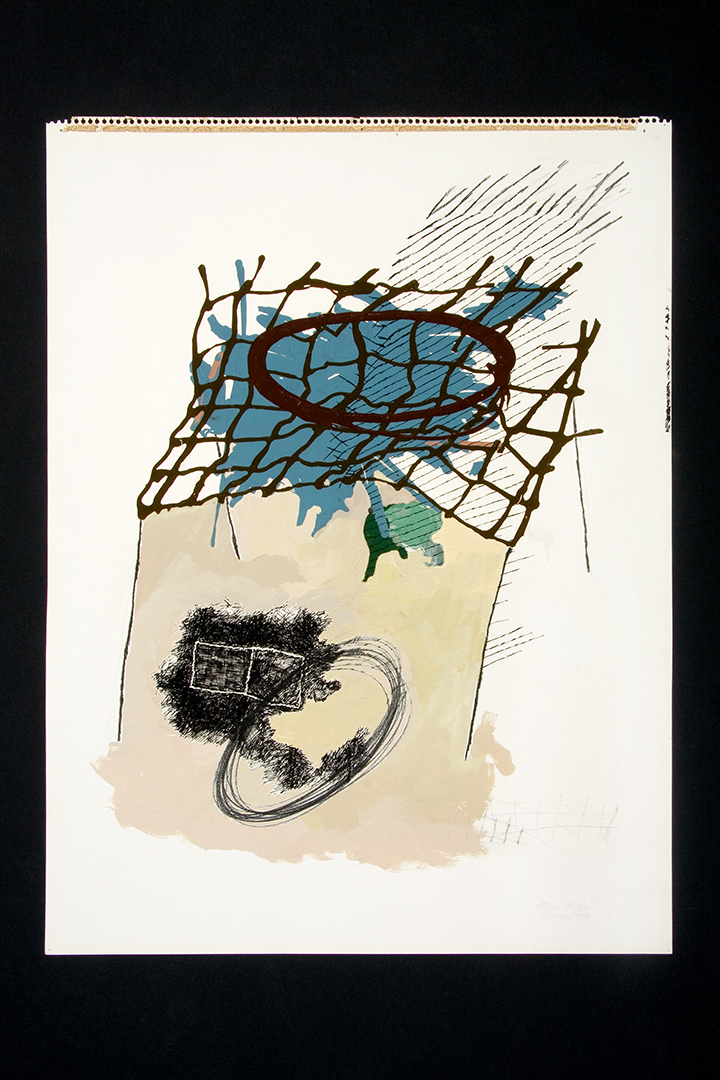 Collection of the Longwood Center for the Visual Arts
The Jack Blanton Collection
Gift of Jack Blanton
2007.23.23

Trained in architecture, Myron Helfgott is known for his multi-media sculpture. This drawing reflects many of the visual elements found in his sculpture and may be seen as a two-dimensional representation of one of his three-dimensional pieces. His work is influenced by his studies with R. Buckminster Fuller (1895-1983, American architect, designer, author, inventor, visionary) during the late 1950s and early 1960s as well as his interest in literature, film, and architecture. Timothy Close wrote about Helfgott’s sculpture for 1991 exhibition at the Portsmouth Museums (Portsmouth, Virginia). He explained:

Helfgott’s pervasive formal bias manifests itself from a high level of artistic craftsmanship and the frequent occurrence of distinctive physical and engineering systems (trusses). The reiterations of key structures are didactic and assigned a metaphoric role, but at the same time remain ambiguous.

Each work consists of an intricate wooden matrix, upon which ideas and other materials (screening, fiberglass, putty, paint, and mechanical objects) are both suspended and infused. As a catalyst, the matrix mobilizes and constrains these materials and figures, in a similar fashion to how a photographic image presents and arrests information. By exposing external and internal elements of both the matrix and the figure, a greater balance is achieved to make traditional peripheral space of sculpture more perceptible and visible.

At the core of his work is the fascination for structural formality; the interfacing and integration of distinct separate systems and the discovery of ambiguous relationships. The conclusions that are drawn from the works, to a degree, are less important than the process of thought to achieve them.

Myron Helfgott received both his B.F.A. and M.F.A. from Southern Illinois University. Exhibitions of his work have been held throughout the country, notably at the Whitney Museum of American Art (New York), the Virginia Museum of Fine Arts, Gallery K (Washington, D.C.), the Chrysler Museum of Art (Norfolk, VA), and the Southeastern Center for Contemporary Art (Winston-Salem, NC), as well as internationally in Tokyo, Lima, and Glasgow. Helfgott served on the faculty in the sculpture department at Virginia Commonwealth University from 1968 to 2003.