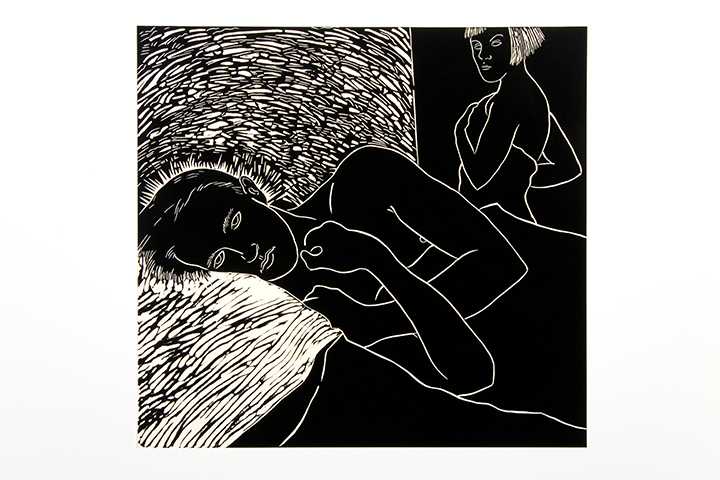 Collection of the Longwood Center for the Visual Arts
The Jack Blanton Collection
Gift of Jack Blanton
2007.23.26

Mary Holland is best known for her distinctive black and white tableaus charged with emotion. Her figures are described with white contour lines on a black background. The scenes capture decisive moments in lives of (primarily) women. There is a mysterious, haunting quality in these ghostly outlines. Deborah McLeod deftly wrote about Holland’s work,

How many hours have been spent mentally reliving a single incident, searching for its meaning, trying to figure out how to undo its impact? How many are spent recalling a pivotal glance or comment that began to unravel a relationship?

The momentous is often an idiomatic pinprick that can never be retracted. Occasionally, this is a euphoric or tender moment, but often the moment is disguised as mundane, pregnant with small aggravation, discouragement or confusion.

These vignettes in time where malignancy and revelation scroll swiftly across the lines of a face and dissipate into memories are what Mary Holland effectively captures.

Mary Holland’s work can also be seen in the Jack Blanton Collection in her collaborations with ceramist Steven Glass. Holland received her B.F.A. from Syracuse University (Syracuse, New York) and M.F.A. from Virginia Commonwealth University. Her works have been exhibited throughout Virginia, and she is a member of the printmakers’ collaborative One/Off. She has served as the Thomas C. Gordon Jr. Director of the Studio School at the Virginia Museum of Fine Arts since 1989.