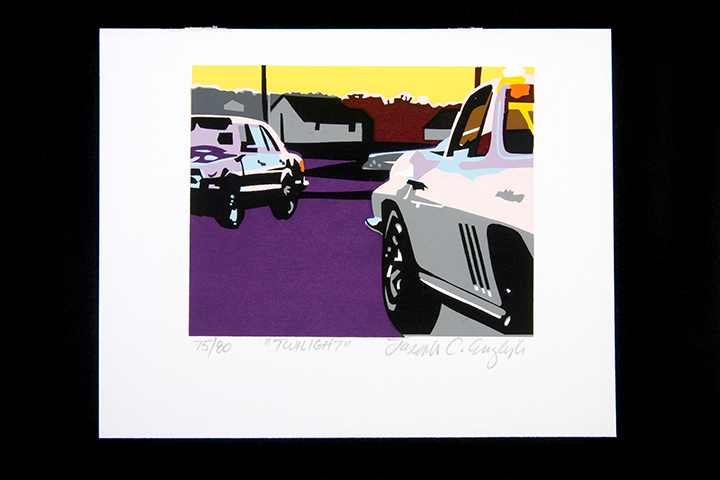 Collection of the Longwood Center for the Visual Arts
The Jack Blanton Collection
Gift of Jack Blanton
2008.13.4

The graphic quality of this piece is emblematic of Joseph Craig English’s style. His saturated colors, bold contrasts, and hard edges are alluring, distinctive, and perfectly suited for his chosen medium, silkscreen (also known as serigraphy, literally “silk writing”). English says, “I use the most traditional means of screenprinting to create my serigraphs. I hand cut lacquer-based stencils, which I adhere to my silkscreen. I then print onto rag paper by forcing ink through the holes in the stencil with a plastic-bladed squeegee.” He begins each work by photographing a scene. Next he makes a contour drawing that will serve as a pattern. In order to make the color separations for each stage of the printing process, he uses tracing paper to plan out each color and to check overall color relationships and registration prior to creating each of the screens necessary. Sometimes more than 15 colors/screens may be used in the process.

As for subject matter, English is inspired by real things—this particular work clearly includes a 1963 Stingray—and real places. Many of his works depict scenes in Richmond. Some portray Farmville sites including landmarks such as the West Third Street train station and Walker’s Diner on Main Street. Farmville and the surrounding area, particularly Buckingham, hold special significance as the place where English’s wife grew up and her extended family lives, and where the couple, who met in art school at Virginia Commonwealth University, spent a lot of time during their courtship.

In the early 1970s English worked as a designer for a Washington, D.C., advertising firm. By 1974 he had resigned, having decided to spend all his time and energy working as an artist. He has a successful studio in Washington Grove, Maryland, where in addition to being a printmaker he is also a painter and sculptor.