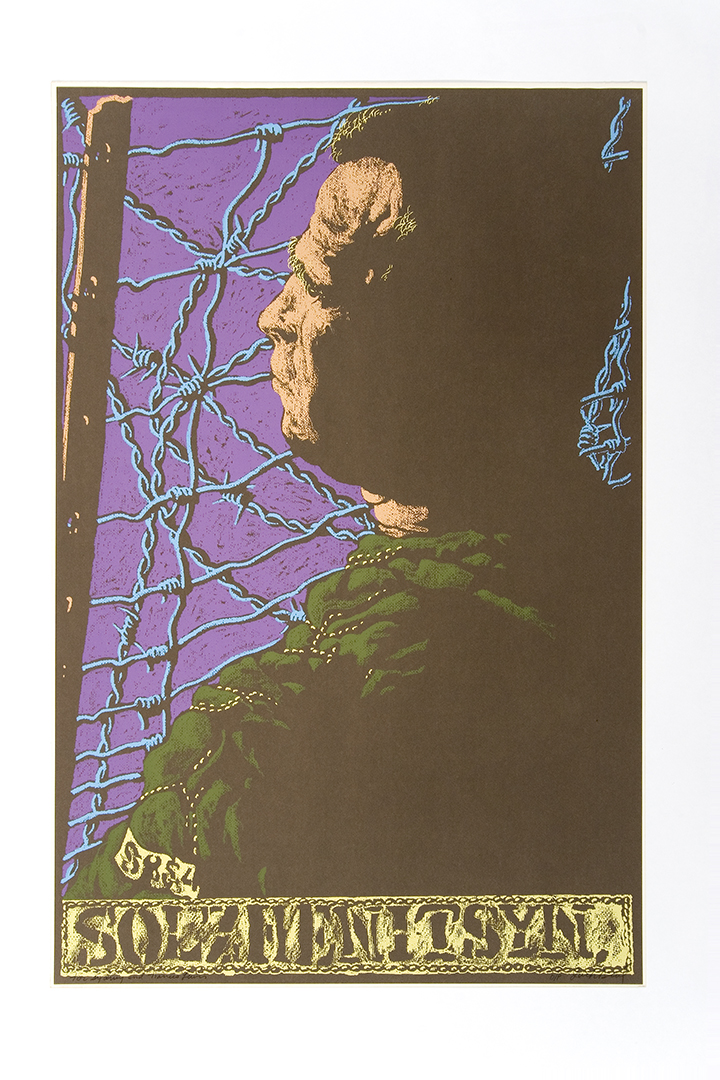 Collection of the Longwood Center for the Visual Arts
Virginia Artists Collection
Gift of the Sydney and Frances Lewis Collection, Richmond, Virginia
2007.26.4

Jack Beal’s Solzhenitsyn depicts the celebrated writer Aleksandr Isaevich Solzhenitsyn (1918-2008). Solzhenitsyn was a Russian novelist and dissident who wrote about the horrors of the Russian labor camps and themes of good vs. evil. Accused of writing disrespectful remarks about Stalin even as he served his country with distinction during World War II, Solzhenitsyn was arrested. He was sentenced to eight years in detention camps, where he did mathematical research for the government and later worked as a miner, bricklayer, and foundryman. Throughout the years he wrote in secret; in 1959 he published his first work. In 1970, he won the Nobel Prize in Literature for his novel The First Circle. Jack Beal’s print, created in 1971, most likely honors this achievement.

The work of Solzhenitsyn must have been an inspiration to Beal. Beal’s work has often focused on themes of fundamental moral choices as he comments on humanism and the American spirit. From 1975 to 1977 Beal created a four-panel mural for the Department of Labor in Washington, D.C., The History of Labor in America. His interest in social commentary and realism places him in the social realist tradition first made popular in the early twentieth century. Noted art critic Hilton Kramer wrote that Jack Beal was “the most important social realist to have emerged in American painting since the 1930s.”

However, Beal’s works are not simply a recycling of somewhat old-fashioned imagery. Beal attended The College of William and Mary and with the encouragement of one of his professors left to study art at the School of the Art Institute of Chicago. There he studied abstract expressionism. In his works one can see traces of this training, specifically, for example, in the graphic quality of the barbed wire in Solzhenitsyn. The influence of Beal’s pop and photorealist contemporaries is also apparent in the work’s saturated color and hard edges.