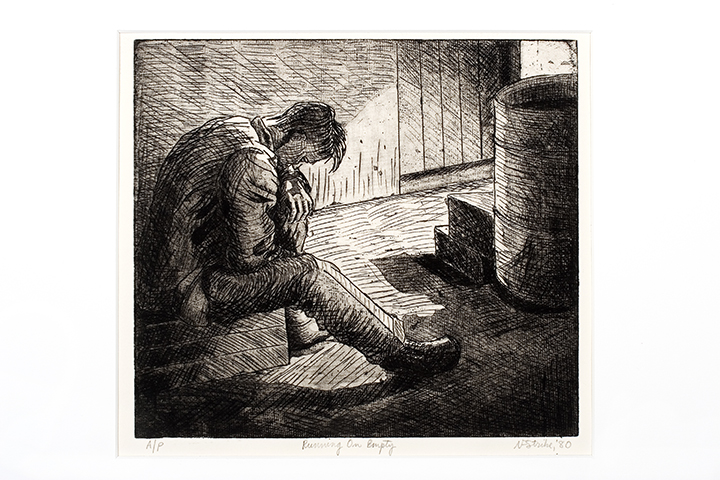 Running on Empty, 1980
etching and aquatint

Norman Strike believes in the power of social activism. Although made in 1980, this print echoes works by artists participating in the Works Progress Administration and Farm Security Administration programs during the Great Depression—works such as photographer Dorothea Lange’s iconic Migrant Mother. Running on Empty is instructional as it invites compassion for human suffering. Norman Strike has said: “Running on Empty is my rumination on homelessness. What causes a person to live on the streets? Are they just down on their luck? Is it because of mental illness? Is it their fault for not living their lives ‘right’? What responsibility do we as fellow humans have? Are we all part of one family and thus have responsibility for each other? I believe we should do for others what we hope they would do for us if conditions were turned around. We never know for sure whether we will be effective when we reach out, but we should do it because it is the right thing to do, not because we expect to gain something from it for ourselves. Ultimately, we improve ourselves and our society by caring for everyone.

“I came of age in the late ’60s and early ’70s, when the political and social times were turbulent. My philosophy was if you weren’t part of the solution, you were part of the problem. I felt that I had to take responsibility, to observe and learn about the issues. Then I had to decide how to respond as an individual for the good of my family, town, country and world. I feel that, as an artist, I have a duty to translate those issues into a visual image.”

It is not surprising, given the concerns that Norman Strike voices, to learn that he earned a BA not in art but in sociology (from Wartburg College in Waverly, Iowa). His concern and compassion for others are clearly evident in his work. Although he had little formal art training, his desire to be an advocate for humanism and social responsibility has found a voice in his art. His works have been exhibited widely in Maryland and Washington, DC, and are in the collections of the Library of Congress, the National Museum of American History, the Corcoran Gallery of Art, and the Baltimore Museum of Art. He resides in Maryland.