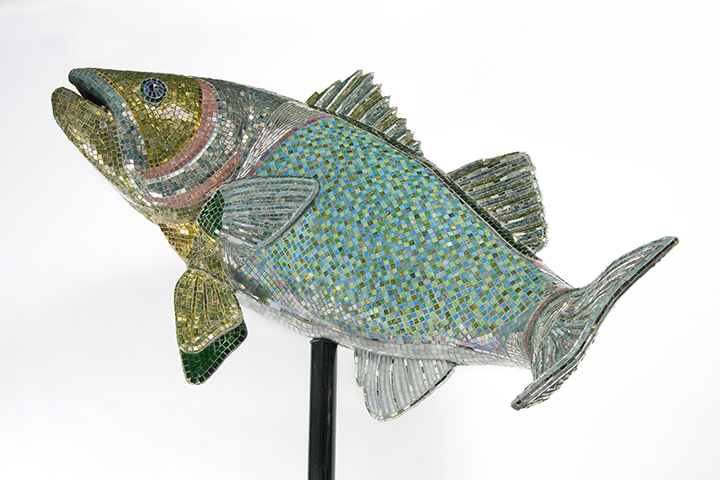 Collection of the Longwood Center for the Visual Arts
The Jack Blanton Collection
Gift of Jack Blanton
2008.13.2

This work was created for the 2001 temporary outdoor art project Go Fish!, organized by 1708 Gallery in Richmond in association with the City of Richmond, Downtown Presents, Richmond Riverfront Development, Richmond Renaissance, Richmond Convention & Visitors Bureau, Virginia Tourism, Virginia Commission for the Arts, Greater Richmond Partnership, Chamber of Commerce, Arts Council, Leadership Metro Richmond, and Retail Merchants Association. Go Fish! was modeled after Chicago’s successful exhibit Cows on Parade, for which artists decorated prefabricated life-size polyurethane resin cows and displayed them throughout the city. For Go Fish!, Virginia artists embellished 200 polyurethane resin rockfish, the rockfish having been selected as the city icon to recognize its resurgence in the James River. Works were either commissioned or auctioned off after the project’s completion to benefit 1708 and other Richmond organizations.

Collector Jack Blanton specifically commissioned this work by mosaic artist Betty Cleal. Jack and Betty were long-time friends. Cleal was the assistant to Media General’s CEO Marshall Morton; Blanton developed Media General’s art collection. The completed Rockfish Under Glass was exhibited in front of the Richmond Times-Dispatch building across the street from Media General. Blanton explained that he had it placed there so Cleal could enjoy it and it would be safeguarded against vandalism. (Guards are on duty 24 hours a day just inside the building.) After the temporary exhibition, this work was installed hovering just above the water in the middle of Blanton’s pool at his home.

A lovely detail, although not visible as the work is displayed here, is a tiny portrait of Blanton’s beloved dachshund, Dachota, embedded in a clear glass tile attached to the top of the fish where the tail joins the body.