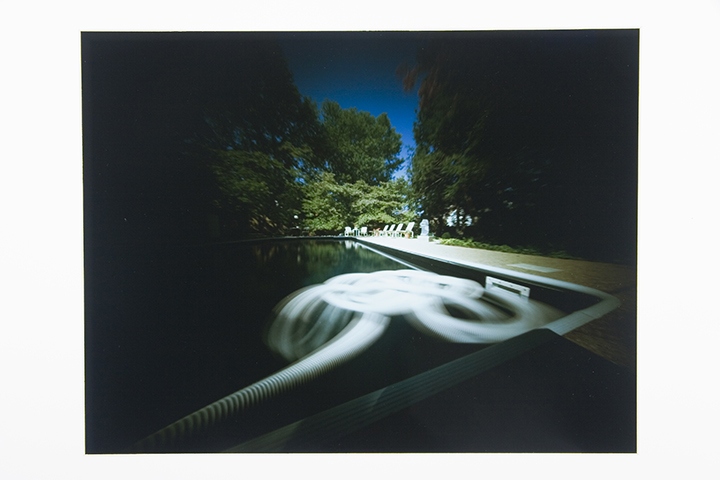 Collection of the Longwood Center for the Visual Arts
The Jack Blanton Collection
Gift of Willie Anne Wright in honor of Jack Blanton
2007.21.5

One of Richmonder Willie Anne Wright’s artist’s cards identifies her as “Artist / Pinhole Photographer.” Wright talked at length about her love affair with the pinhole camera for an article in the May–June 1987 issue of Richmond Surroundings. The “limitations” of pinhole photography are part of its charm for Wright. Only certain subjects are appropriate for this medium because of the long exposure times required. Inanimate forms and their animate proxy, sunbathers, suit the medium. Jack Blanton’s swimming pool offered Wright something else, something of the drama and mystery that infuses much of her work: “One day I went to a party where there was a swimming pool that had a really theatrical quality. It was black and formal. It already seemed like a piece of art. The feeling I got was so strong. I knew that’s what I wanted to photograph.”

The pinhole medium has an additional interest: a drama created by its simplicity. The lack of a lens, shutter speed settings, and control of depth of field means that the image is distorted, seemingly subject to the pull of magnetism or memory, and has a haziness that in Wright’s hands becomes mysterious. Because the camera has no viewfinder, the photographer must carefully position the camera in front of the scene before removing the cover from the aperture (the pinhole opening) to begin exposure. The exact composition of the image is not completely controllable, and the first view of the image has an element of surprise. What moved during the exposure period? What lurks in the shadowy circumference? Wright said: “When people go all the way to the end of technology, they get interested in what’s at the other end. In photography, it’s pinhole. It’s what you can do with practically nothing. You’re so right down to the elements, it’s pure magic. It’s part of me now. . . . I’ve begun to see things the way the pinhole sees them—almost surreal.”