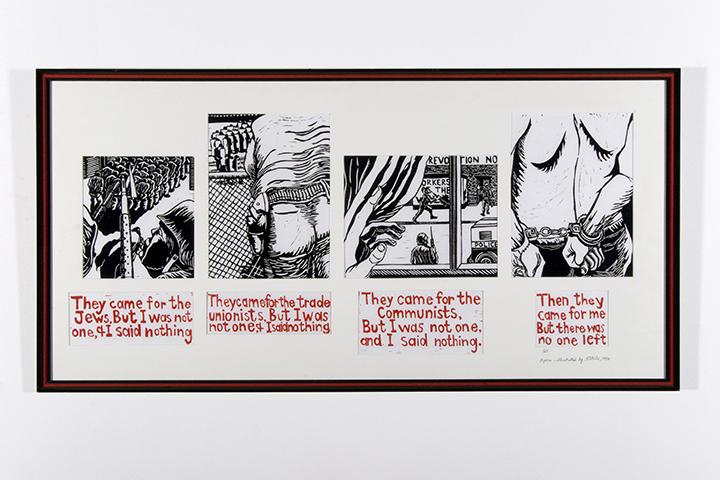 Norman Strike himself comments on this work. He says, “I am often inspired by the words and lyrics of poets and songwriters. The poem used in the work stems from a poem from the World War II era. I’ve heard it attributed to a friend of Dietrich Bonhoeffer, a Lutheran pastor who was hanged for participating in a plot to assassinate Adolf Hitler. It comes back to responsibility: when you see a problem, make it yours and do something about it. Don’t just sit there.”

“I came of age in the late ’60s and early ’70s, when the political and social times were turbulent. My philosophy was ‘if you weren’t part of the solution, you were part of the problem.’ I felt that I had to take responsibility, to observe and learn about the issues. Then I had to decide how to respond as an individual for the good of my family, town, country and world. I feel that, as an artist, I have a duty to translate those issues into a visual image.”

It is not surprising, given the concerns that Norman Strike voices, to learn that he earned a BA not in art but in sociology (from Wartburg College in Waverly, Iowa). His concern and compassion for others are clearly evident in his work. Although he had little formal art training, his desire to be an advocate for humanism and social responsibility has found a voice in his art. His works have been exhibited widely in Maryland and Washington, DC, and are in the collections of the Library of Congress, the National Museum of American History, the Corcoran Gallery of Art, and the Baltimore Museum of Art. He resides in Maryland.