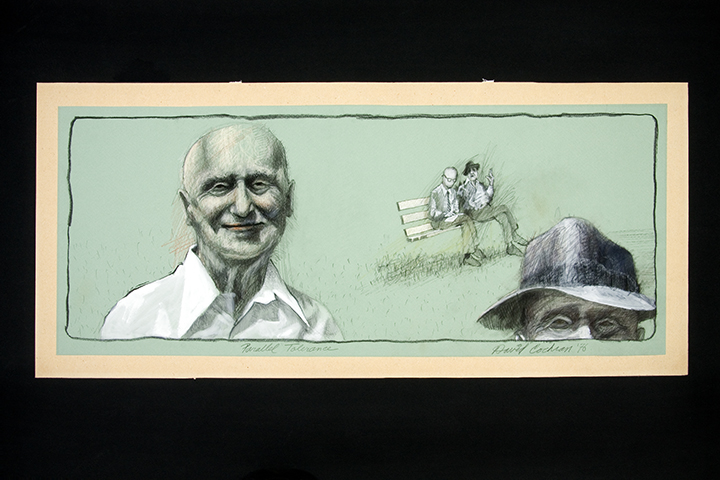 Collection of the Longwood Center for the Visual Arts
The Jack Blanton Collection
Gift of Jack Blanton
2012.12.7

David Cochran holds a B.F.A. from Virginia Commonwealth University in painting and printmaking. For many years he has been a freelance artist living in Alexandria, Virginia, where he has a studio located in the Torpedo Factory Art Center. Exhibiting extensively in Virginia, he is represented in the permanent collections of the Chrysler Museum of Art, the Federal Reserve Bank of Richmond, and the Ethyl Corporation, among others.

Richmond Times-Dispatch critic Roy Proctor wrote in 1981 about a solo exhibition of Cochran’s drawings held at Cudahy’s Gallery in Richmond: “The drawings are fine in themselves. Many will remind visitors of the graphics of David Hockney without the allusions becoming burdensome.” In a 1983 article Proctor wrote, “Although the figures usually maintain a kind of physical and psychological distance from each other even when they are in the same painting, they do suggest relationships which, in turn, suggest narrative possibilities. None of the ‘stories’ are spelled out, however, and the ambiguity that Cochran achieves—strongly suggesting there is a story but refusing to reveal it precisely—is what makes so of many of these paintings intriguing.”