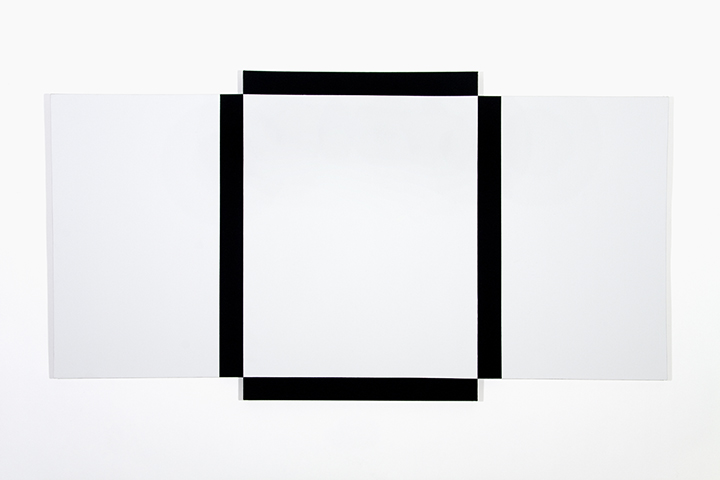 Collection of the Longwood Center for the Visual Arts
The Jack Blanton Collection
Gift of Jack Blanton
2007.23.8

This painting was commissioned by Jack Blanton in 1982. Another work from the same series, Marker II (Canaday), 1980, hung in Blanton’s office at the Federal Reserve Bank in Richmond. While at the Federal Reserve Blanton was responsible for the development of the Bank’s art collection. Carlyon’s Marker II (Canaday) was purchased at the suggestion of the renowned Virginia art collector Frances Lewis. Blanton said, “Later, I commissioned Dick to do a painting for me ‘that would fit over my sofa’—no other direction. He said it was the only painting he ever did on commission. It, Marker IV (Lisbon), is very much like Marker II (Canaday) but is much more horizontal. I always found both of them very relaxing—telling, I suppose, that I chose his work for my office among all that was available.”

After the completing the commission, Richard Carlyon sent a letter to Blanton dated June 10, 1982.

Dear Jackson Lee (!)—
A short note to thank you for the commission. As you know it was my first and proved to be quite a challenge; never before had I had to go at a painting starting with “constricted” dimensions and proportions. Believe me, I learned a great deal from the experience. Beyond that, what is important of course, is the result and I feel “Marker IV (Lisbon)” is a continuation and an extension of my enduring painting concerns. You can be sure I would not have turned the painting over to you unless I felt it was “alive” and complete.
I am extremely pleased you have responded to the painting so enthusiastically because it indicated a form of communication is taking place. I also take great comfort knowing the painting is in the care of a sensitive and intelligent individual and that the work can be viewed in a warm and dignified setting.
I hope “Lisbon” will continue to provide you, your colleagues and friends with interest and pleasure.
Best regards,
Dick

Marker II (Canaday), 1980, shown in the office of Jack Blanton at the
Federal Reserve Bank of Richmond in 1995.