Looking to New Jersey in Winter 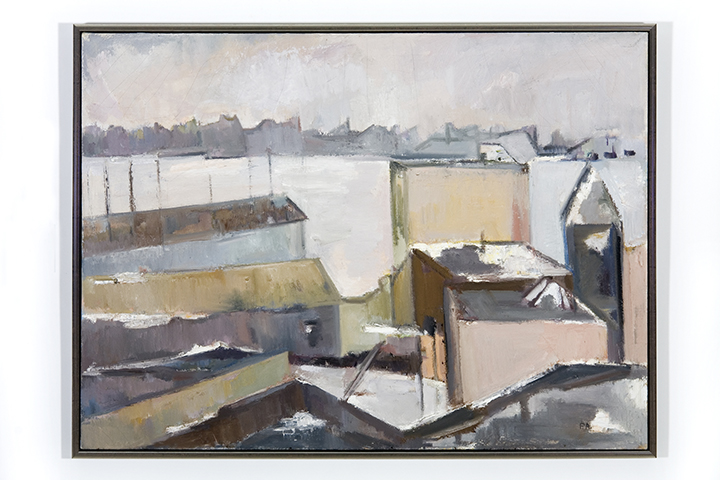 Looking to New Jersey in Winter

Looking to New Jersey in Winter, c. 1979
oil on canvas

Collection of the Longwood Center for the Visual Arts
The Jack Blanton Collection
Gift of Jack Blanton
2012.12.2

Peggy Anderson painted this work shortly after moving to Greenwich Street in New York in the late 1970s. Through a window of her apartment she could look across the Hudson River to Hoboken, New Jersey. She recalled that the scene depicted illustrates her interest in the colors and shapes of the rooftops, buildings, and river during a winter of many snowstorms.

A graduate of Sarah Lawrence College with an M.A. in dance and performing arts, Anderson was a talented dancer and dance teacher for more than 40 years. In an effort to develop a creative outlet that she could practice on her own, she began painting on New Year’s Day in 1957. Her interest was spurred by her having been a model for artist Harriet Fitzgerald (whose work is also in the Jack Blanton Collection). Fitzgerald was her teacher, friend, and companion for more than 30 years. The two worked tirelessly supporting and directing the Abingdon Square Painters guild in New York, which Fitzgerald had founded. After Fitzgerald’s death in 1984, Anderson served as director until 2007.

Anderson paintings have been exhibited in numerous East Coast museums and galleries. Her works can be found in permanent collections at Randolph-Macon College, Randolph College, Ferrum College, Hampden-Sydney College, the Federal Reserve Bank in Richmond, and the Danville Museum of Fine Arts and History, among others.