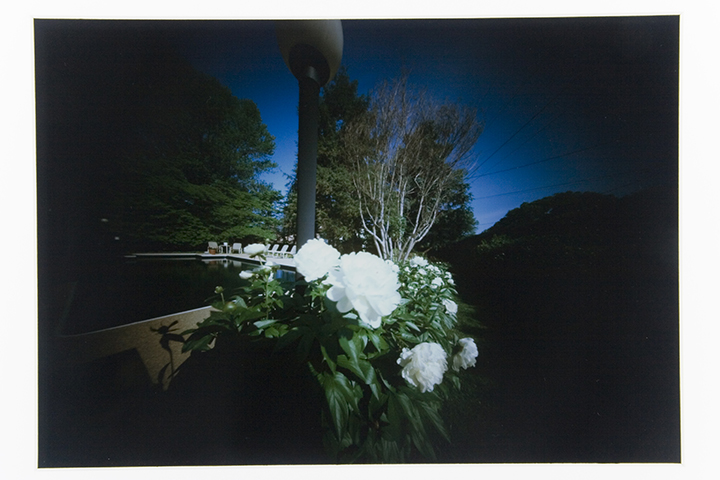 Collection of the Longwood Center for the Visual Arts
The Jack Blanton Collection
Gift of Willie Anne Wright in honor of Jack Blanton
2007.21.7

Richmonder Willie Anne Wright became a pinhole photographer inadvertently. In 1972 she took a photography class at Virginia Commonwealth University with the sole intention, she claims, of learning to make good slides of her paintings. A requirement of the class was to build a pinhole camera out of matboard. Grumbling at the waste of time, she made the camera—and found she loved the distinctive quality of the pinhole image.

She has made numerous series using the pinhole camera, many of them black and white or sepia-toned images with implied narrative content where past and present mingle: Civil War reenactments, for example, and a series called Southland (Graves and Ruins). Turning to contemporary imagery and Cibachrome film, she began taking pictures of what one exhibitor of her work called “backyard swimming pools of Virginia’s upper class.” All the works by Wright on exhibition in these corridors, paintings as well as pinhole photographs, depict scenes at Jack Blanton’s black-painted swimming pool in Richmond. Wright stopped using color film in the late 1980s, wary of the toxicity of the chemicals involved.

Willie Anne Wright earned an M.F.A. in painting from Virginia Commonwealth University and a B.S. in psychology from the College of William and Mary. She studied photography at VCU, the Visual Studies Workshop in Rochester, New York, and the Maine Photographic Workshop. Also a printmaker and painter, she is most widely known for her photography, for which she received Richmond Magazine’s Theresa Pollak Award for Excellence in the Arts in 2001 and was given a retrospective, “Willie Anne Wright: Lensless Images,” at 1708 Gallery in 2003. Her work can be found in the collections of the Virginia Museum of Fine Arts, the Chrysler Museum of Art (Norfolk), the High Museum (Atlanta), the New Orleans Museum of Art, and the Smithsonian American Art Museum, among other public and private collections.