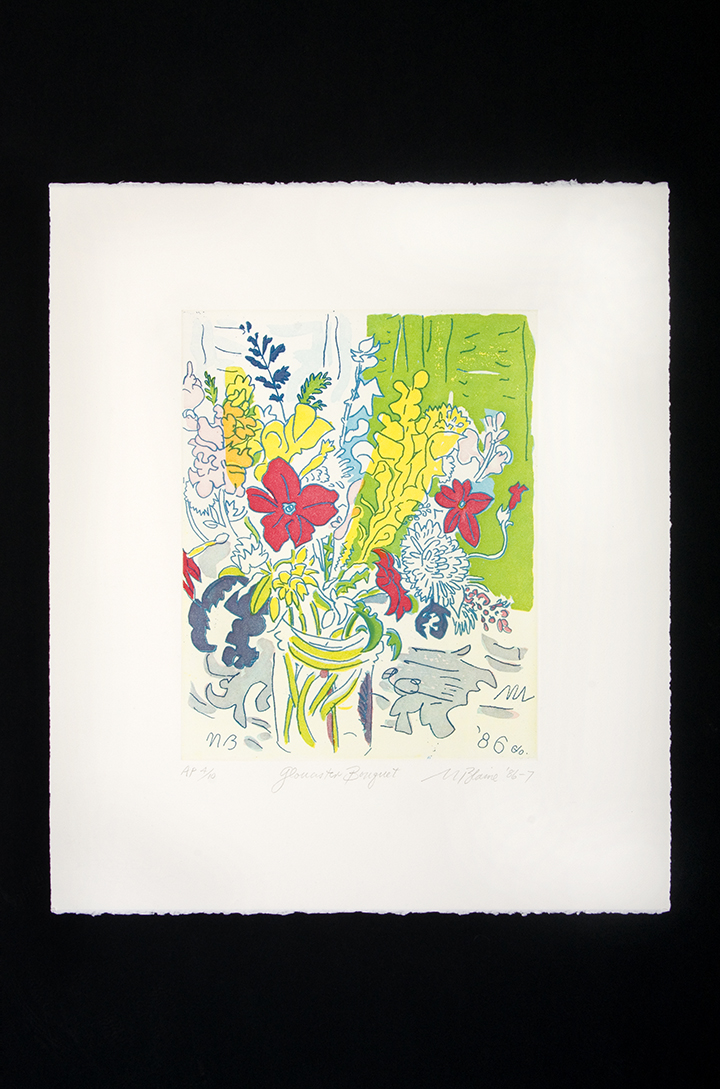 Collection of the Longwood Center for the Visual Arts
The Jack Blanton Collection
Gift of Jack Blanton
2007.23.4

Born in Richmond, Nell Blaine is perhaps one of the most celebrated of Virginia artists. She attended Richmond Professional Institute (now Virginia Commonwealth University) but in 1942 left her home town to study in New York and Provincetown, Massachusetts, with the influential teacher and prominent developer of Abstract Expressionism, Hans Hofmann. Exposed to a wider, exceptionally stimulating art world, Blaine blossomed as an artist. In a May 13, 1957, article in Life magazine entitled “Women Painters in Ascendance,” Dorothy Seiberling profiled the 34-year-old Blaine as one of five of America’s important young woman artists. In a notice published November 15, 1996, at the time of Blaine’s death, New York Times art critic Roberta Smith commented on her stylistic development. “From the mid-1950’s she cultivated an increasingly painterly and colorful style, usually working directly from nature, or still life, with particular emphasis on the forms and hues of flowers. Her work retained a sense of all-over structure and pulsating energy that she . . . credited to abstract art.”  Blaine’s work is in many collections including those of the Brooklyn Museum, the Museum of Modern Art, and the Whitney Museum of American Art (all in New York), and the Virginia Museum of Fine Arts.

Gloucester Bouquet was created as part of New York’s Metropolitan Museum of Art’s limited-edition program in an edition of 50. Blaine prepared the three plates required for the job, and the printing was done by master printer James Stroud. The title refers to Gloucester, Massachusetts, where Blaine often spent summers. This bouquet was likely gathered from her cherished garden at her home there. Jack Blanton purchased this artist’s proof (a first print made for the artist to check the quality before the entire edition is printed) from Reynolds/Minor Gallery in Richmond in 1987. The work exemplifies the artist’s interest in painters like Édouard Vuillard (French, 1868-1940) and Pierre Bonnard (French, 1867-1947) and late-19th-century art traditions.

Nell Blaine and Jack Blanton had an enduring friendship that began in 1979, when Jack wrote Blaine about how fond he was of her work. After a meeting at her studio in New York that same year, Blaine wrote, “Your warm letter is a pleasure and I thank you for such enthusiasm. It was just as nice for me to meet you and I enjoyed it for it is rare that one meets nice people that one genuinely likes instantaneously. I say this sincerely about you!” The two corresponded frequently over the years. In 1985, when Blaine received an honorary doctorate from Virginia Commonwealth University, Jack hosted a luncheon at his home. The photograph from that afternoon shown here illustrates their mutual affection.