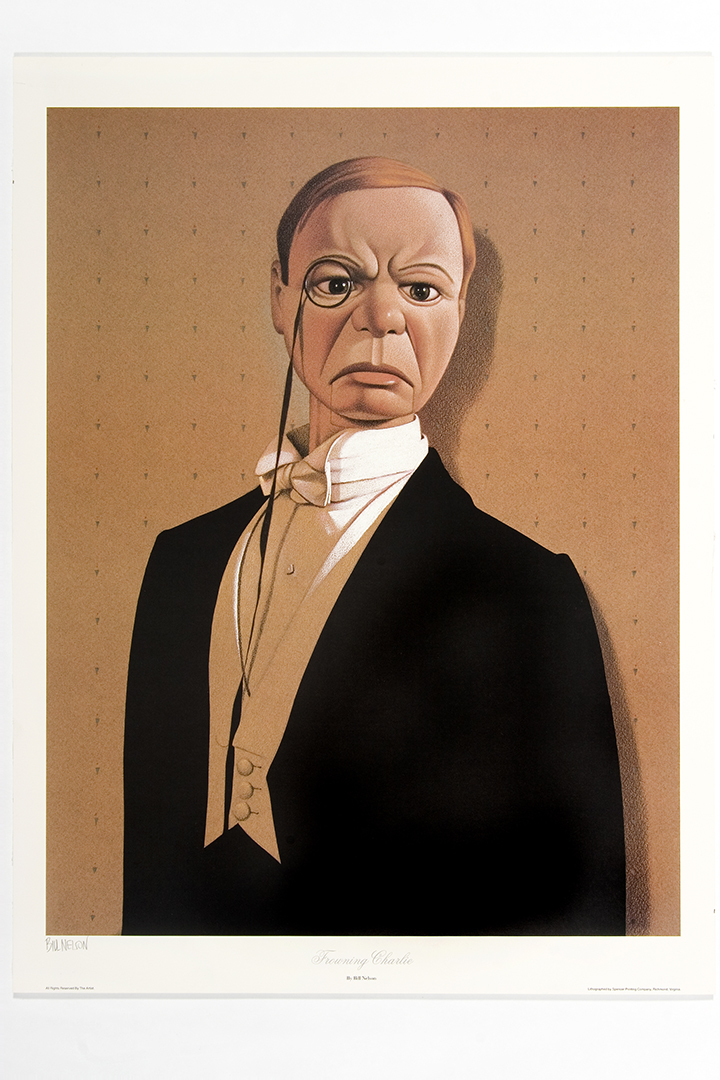 Collection of the Longwood Center for the Visual Arts
Virginia Artists Collection
Gift of the Artist
2005.48

This image depicts Edgar Bergen’s famous ventriloquist dummy, Charlie McCarthy. Their act in the 1930s, ’40s, and ’50s was surprisingly funny. Although Charlie was supposed to be a boy, he dressed in a tuxedo and top hat and made very insulting, wry remarks. This picture is of a Charlie McCarthy doll that the artist owns. It was used by Bergen in a Walt Disney film made during World War II.

Bill Nelson has had a long fascination with ventriloquist dolls and doll-making in general. He explains, “I have always had a keen interest in puppets, marionettes, and ventriloquist dummies. In fact, for a few years I was a ventriloquist until my stage fright forced me to quit. . . . I still love having puppets and ventriloquist dummies hanging and sitting in my studio. They often serve as models in my drawings.” In addition to his work as an illustrator, Nelson is a nationally recognized doll-maker whose one-of-a-kind works are in the private collections of celebrities including Demi Moore, Whoopi Goldberg, and David Copperfield, among others.

Bill Nelson received a B.F.A. from Virginia Commonwealth University. His work as an illustrator is well-known. His works have been featured on the cover of Time, Newsweek, The Washington Post, TV Guide, The Los Angeles Times, The Atlantic Monthly, The Wall Street Journal, and The New Yorker. Subjects of his illustrations have included Richard Nixon, Ronald Reagan, Jimmy Carter, Gerald Ford, Bette Midler, Carroll O’Connor, Elizabeth Taylor, and many others. He is nationally recognized, having won two gold medals from the Art Directors Club in New York and two silver medals from the Society of Illustrators.