The Folly Farm Studio I (Studio with Sleeping Greyhounds) 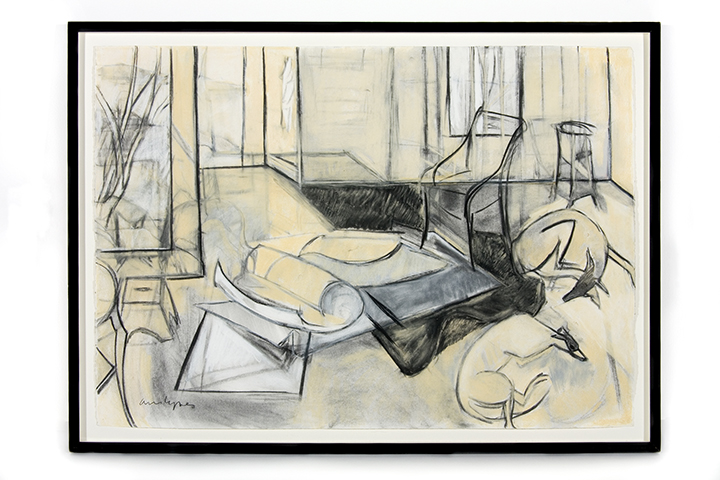 The Folly Farm Studio I (Studio with Sleeping Greyhounds)

The Folly Farm Studio I (Studio with Sleeping Greyhounds), 1993
Conté and pastel

Collection of the Longwood Center for the Visual Arts
The Jack Blanton Collection
Gift of Jack Blanton
2009.2.4

Ann Lyne has always been an artist; she drew from childhood. Seeking strong
formal training, she enrolled at Richmond Professional Institute (now Virginia Commonwealth University). In a January 10, 1982, review by Robert Merritt in the Richmond Times-Dispatch, Lyne recalled her entrance at RPI: “I met Theresa Pollak in the registration line and she looked at my portfolio. She looked at my work, then looked at me and said, ‘You’ll have to start school all over again.’” This daunting beginning developed into a friendship—Lyne considered Pollak a mentor, friend, and hero—that lasted until Pollak’s death in 2002. At RPI Lyne studied studio art and art history. Marrying and then relocating, she received her B.A. in painting and printmaking from American University in Washington in 1959 and then found herself for a time fitting her art production into spare moments allowed by the demands of raising three daughters, eventually as a single parent. Summer residencies, beginning in 1979 at the Virginia Center for the Creative Arts in Sweet Briar and continuing at Yaddo in Saratoga Springs, New York, in 1981, impelled her back into her art. She received an M.F.A. from American University in 1979, and then began teaching art part-time and creating art with energetic commitment, both in the Richmond area and in rural Bath County in western Virginia. She moved to Bath in the late 1980s, having arranged for Jack Blanton to serve as her artist’s representative in the wider world.