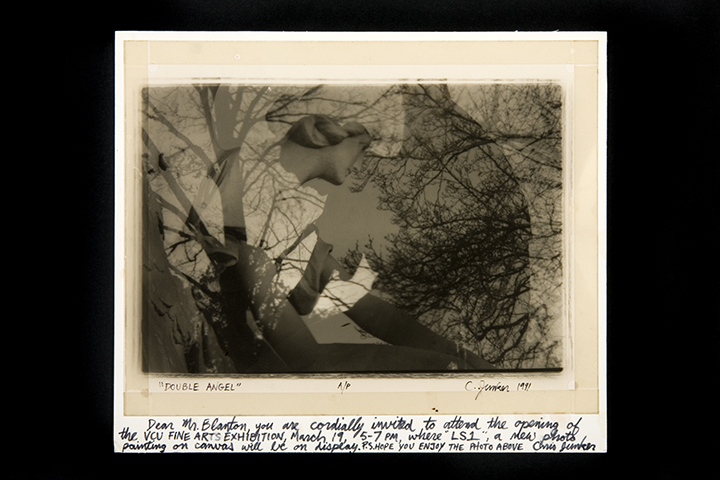 Collection of the Longwood Center for the Visual Arts
The Jack Blanton Collection
Gift of Jack Blanton
2010.41.15

Chris Junker created this photograph by making a double exposure on a single traditional negative. The negative was printed in a darkroom. According to Junker, the image “is a study of how positive and negative space interact in a created space. What would normally be negative space (a silhouette of the statue on the right side) can be transformed into positive space with the overlapping of the two images.”

The photograph depicts two different views of a stone angel in Richmond’s Hollywood Cemetery. Established in 1849 on the banks of the James River, Hollywood Cemetery is known for its beautiful, picturesque landscape designed in the rural garden style. The cemetery takes its name from the holly trees on the hills of the grounds. Many of the most notable Virginians are buried there, including presidents James Monroe and John Tyler.

The photograph was sent to collector Jack Blanton to invite him to a Virginia Commonwealth University Fine Arts Exhibition held on March 19, 1991. Junker wrote the invitation on the photograph, adding an earnest “P.S. Hope you enjoy the photo above.”