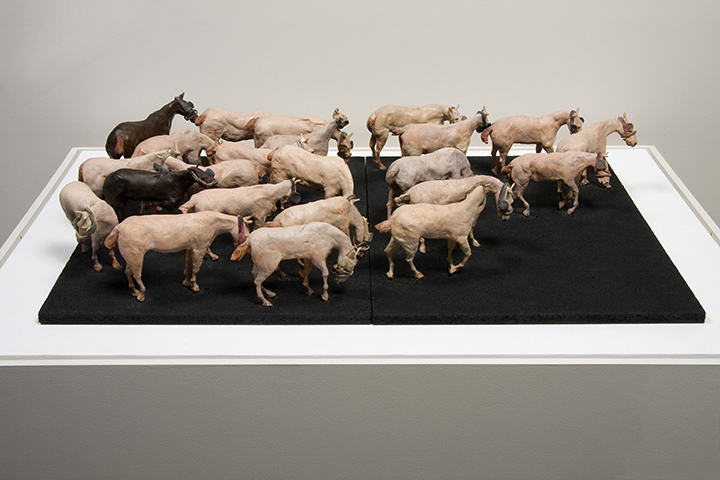 Collection of the Longwood Center for the Visual Arts
The Jack Blanton Collection
Gift of Jack Blanton
2007.23.50

Aggie Zed was born Emily Agnes White. Growing up, she went by “Aggie.” After getting a divorce, she decided to take her father’s first name as her last rather than going back to her maiden name. She is as unconventional as her name. In addition to being known for her art, she is infamous in Richmond for attending the Beaux Arts Ball as the incarnation of Marcel Duchamp’s painting Nude Descending a Staircase (1912). According to an August 1992 article in the Richmond Times-Dispatch, “Except for the combat boots on her size 8 feet and the plastic foam staircase in her hand, Ms. Zed spent the entire evening stark naked, nibbling French hors d’oeuvres and socializing with Richmond’s most esteemed patrons of art—a group that grew vehemently divided over her choice of attire. Or lack thereof.”

This work is from a series Zed created in the early 1980s. Jack Blanton bought this work for himself and also bought one in his capacity as curator of the collection of the Federal Reserve Bank of Richmond. As he compiled information about the works in the Bank’s collection, Blanton included for this work, along with a short biography, this statement by Zed from 1983:

Countenance is one of a group of works which employs the image of horses to express an aspect of the human condition. Two hundred painted clay horses walk in seeming procession; no explanation or end to this procession is given. At the edge of the platform across which they walk the herd seems to slow, to become aware of some confinement. They prepare to change direction, possibly to walk again the length of the platform, and then again and again. Each of the horses wears harness blinders. The animal can see well only the path directly before it.

I have tried, by placing the horses, each with its individual gesture, to create a population which behaves as I have seen humans behave. They move on, unhurried, quite calmly, as if their reduced vision were a source of comfort rather than a source of fear or terror. I invite the viewer to see the herd as none of the individual members is able to see it. The horses are vulnerable in their aimlessness. And this vulnerability is emphasized by the scale of the work.