Beginning of the Journey 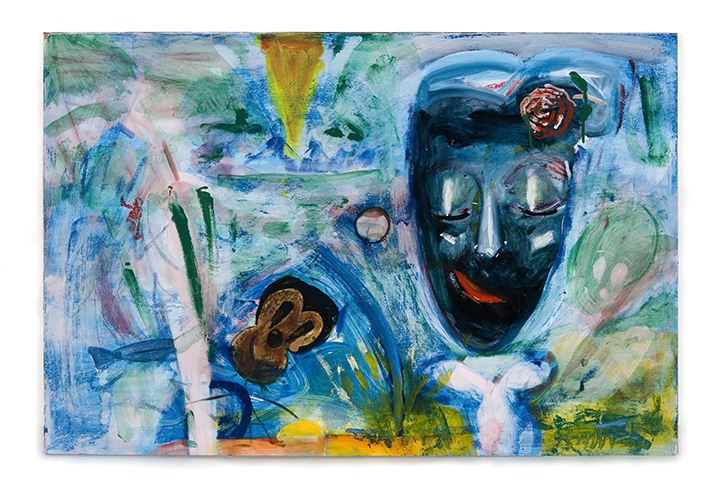 Beginning of the Journey

Collection of the Longwood Center for the Visual Arts
The Jack Blanton Collection
Gift of Jack Blanton
2007.23.17

After teaching printmaking at Virginia Commonwealth University (VCU), Gerald Donato took a leave of absence from his post in 1976 to paint in New York. In an essay written for Donato’s retrospective held at VCU’s Anderson Gallery in 2007, Richard Roth said, “Donato’s goal was to ‘paint as good as he could draw.’ This autodidactic approach might account for the many works that seem to have been arrived at through a logic that is unique and unexpected. . . . Jerry so often finds his own way to build a painting—a series of unique and authentic moments that add up to a distinctly eccentric, off-kilter, and sometimes perverse take on painting.”

That “eccentric, off-kilter, and sometimes perverse take” is certainly exhibited in this painting. Donato is a mischief-maker who creates his own visual language from vibrant colors, a whirlwind of brush strokes, and quirky and enigmatic figures. The two characters that lurk in many of his paintings are found here: “Mr. Man,” a Mickey Mouse/Steamboat Willie–like character; and a voluptuous female muse character who is typically portrayed with her eyes closed. A narrative is always suggested but never explained.

It has been speculated on numerous occasions that “Mr. Man” is Donato and the female figure his wife, artist Joan Gaustad. Stephen Westfall, also writing an essay for the Anderson Gallery retrospective, said of Donato’s use of the Mickey Mouse–like face: “Donato immediately felt a psychic link with the cartoon figure; in his devil-may-care manner, Steamboat Willie was a kind of doppelganger, or daimon, of the male principle: creature of action, footloose, mischievous, bewildered as often as inspired. This ‘Mr. Man,’ as Donato referred to him, was himself soon to be haunted by another figure, an Eve to his Adam.”

Stephen Westfall places Donato’s work within postmodernism for utilizing cartoon-inspired figures, much like the works of Kenny Scharf and Keith Haring, as well in the traditions of the Symbolists and Expressionists such as James Ensor and Max Beckmann for its use of metaphors for personal journeys in a kind of dream space.