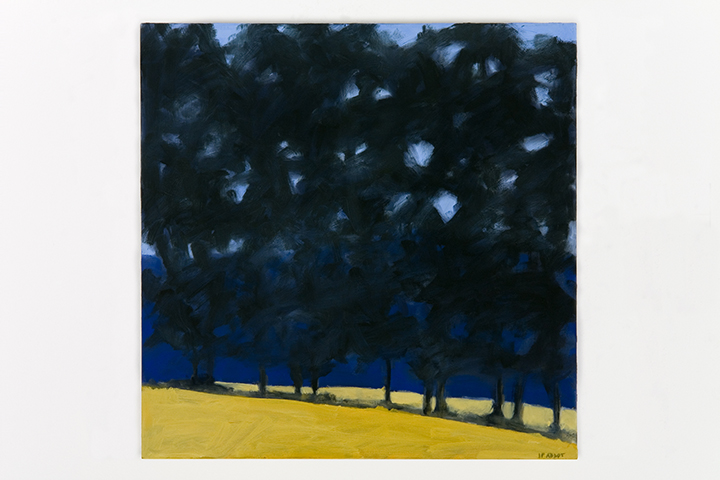 Collection of the Longwood Center for the Visual Arts
Virginia Artists Collection
LCVA purchase, made possible through a gift from Homer Kephart
for the Bobby Chandler Memorial Collection
2009.36.2

The rural landscape just west of Charlottesville, Virginia, inspires Isabelle Abbot. As a child she played in the woods of this area; now she revisits these scenes to create her evocative paintings. Abbot explains, “In my work, I wish to pay tribute to those places and to this particular moment in the Southern landscape. That landscape mirrors our culture. As our farmland is lost and a way of life passes with it, there is value in commemorating the transition and the loss of something historically and personally significant. Paintings of farms and homes suggest something familiar that we have left behind, but that still speaks to us. These places hold court in our memories and we know them when we see them, even if we do not recognize them.”

Abbot is known to drive the back roads of Albemarle County in search of just the right combination of natural and man-made elements accentuated in a fleeting moment of light. For this particular work, painted in the summer of 2008, she pulled over on the edge of Gillum’s Ridge Road and went to work. Allie Pesch, writing in 2009 for the Crozet Gazette, stated, “Abbot’s landscapes are more personal than picturesque. Rather than reproducing a forest run wild, or a vast mountainous vista, she focuses on humanizing her landscapes—conveying the scenes of man and nature working together—namely, farmland. Abbot likes to refer to her work as ‘land portraits’ rather than landscapes. The fields in her paintings are all altered by human hand. Though the tractors, cattle, or farmers may not appear themselves, the marks of their presence on the land are always present.”

Abbot’s combination of sound draftsmanship, richness of color, and loosely defined shapes references many significant art movements of the 19th and 20th centuries.

Her paintings incorporate elements from Realism, Impressionism, Abstract Expressionism, and Color Field Painting. Her style, encouraged by her University of Virginia art professors Philip Geiger and Richard Crozier (the latter of whose work is also in the LCVA collection and can be seen in the Chichester Science Center), also pays homage to the work of Wolf Kahn. Kahn’s work has been described as synthesizing elements of the Abstract Expressionism of Hans Hofmann (American, 1880-1966), the palette of Henri Matisse (French, 1869-1954), and the light and emotional qualities found in American Impressionism.