2020 Community Achievement in the Arts Awards 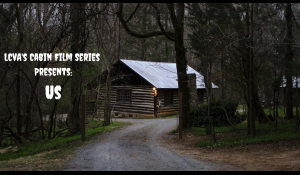 The Longwood Center for the Visual Arts’ (LCVA) Cabin Film Series returns on Friday, February 21st at 7:00 p.m. with a free screening of the horror film 'Us' at the Longwood Cabin.

This dystopian horror film centers on a woman reluctantly returning to her childhood home with her family. The childhood trauma she suffered creates tension surrounding her return. The family plans to unwind from their busy lives, but a series of eerie occurrences sets everyone on edge.

The screening is part of the Cabin Film Series, which showcases classic and cult horror films at the Longwood Cabin. Hosted by the LCVA, the event is guest curated by Dr. Chris McGee, Associate Professor in the English and Modern Languages Department at Longwood. Prior to the film, Dr. McGee will introduce the film and lead a group discussion exploring its themes.

The event is free and open to the public. No registration is required. Attendees are encouraged to dress warmly for the winter screening --- the cabin, accessed by a short walk through the woods, is heated by a fireplace. Campfire-themed refreshments will be served.

The Longwood Cabin is located at 1401 Johnston Drive, Farmville, VA 23901. Traveling from town by East Third Street, turn right at the intersection by Sunchase Cinema 8 onto Longwood Avenue, then turn left onto Johnston drive followed by a right turn onto a gravel road that leads to the cabin.